Girl Scouts of Northern California has a number of digital and print publications to keep you informed and ensure girls get the most out of their Girl Scout experience.

For questions about GSNorCal's emails or publications, please contact the Marketing Department at social@gsnorcal.org.

All members, volunteers, and families will receive our emails to the address we have on file in their MyGS profile and do not need to subscribe, unless they have previously opted out.

May 20, 2021: Summer Programs and camping now and in the fall; COVID updates; Looking forward to a new Girl Scout year: time to join, re-join, renew andspread the word; A round of applause and appreciation for our cookie entrepreneurs and volunteers; Congratulations to the Space Cookies FIRST Robotics team!; Gold Award Congratulations; Council Governance & Annual Meeting–centering girls’ voices; Courage Cohort-volunteers working together to advance our commitment to be an anti-racist organization; Philanthropy news; Camp Skylark Ranch update–resilience and recovery; Celebrating our graduating seniors and their volunteers

October 29, 2020: New Programs and new ways to find programs for individual girls and troops; Leadership and sisterhood for girls in grades 6–12; Increasing access to Girl Scouts for girls who live in low-income communities; Introducing your friends and community to Girl Scouts; Celebrating our wonderful volunteers; Supporting girls and troops through our fall take action product program; Call for Service Unit Delegate Nominations (girls and adults, and you may nominate yourself); Report on 55th National Council Session; Fire recovery update; COVID-19—our commitment to do our part to reduce community transmission; Progress on our commitment to be an anti-racist organization

May 27, 2020: Update on the timeline for in-person Girl Scout activities

April 6, 2020: Programs and events: extending our no events or in-person troop meetings rule from May 11 to June 1, 2020; Supporting girls and families; Appreciating our volunteers; Working together to keep our communities healthy; Summer Camp and Property Reservations; 2020 Cookie Program—a roller coaster, for sure; Cookie entrepreneurs are responding to COVID-19!; Virtual Annual Meeting and Spring Town Halls; Gratitude

May 3, 2019: A spectacular day for celebrating 6,000 G.I.R.L.s at Golden Gate Bridging; A new Program Center coming soon for Butte County; Celebrating resilience in Butte County; Listening to the Voice of Members at our 2019 Annual Meeting; Working together to increase access to essential Girl Scout experiences for girls who live in low-income communities; State of the Council and 2018 Annual Report; Summer camp is calling!; 742 graduating seniors

August 9, 2019: Thank You for All that You Do: A Note of Appreciation from GSNorCal CEO

: Gratitude for the thousands of firefighters, first responders, and volunteers who are on the front lines; Service Unit Delegate Nominations and National Council Delegate Applications are open

May 4, 2018: Girl Scouts flourish at Golden Gate Bridging; Annual Meeting update and introducing our newly elected Board President, Board members and Board Development Committee; update on confusion about “scouting for girls”

January 19, 2017: Girl Scouts and the Inauguration

December 21, 2016: getting prepared for the new year, saying farefell to staff, office and camp holiday closures, The Trailhead

The Trailhead is GSNorCal's troop volunteer support blog. Visit The Trailhead to subscribe and read our posts!

Volunteer View is an email newsletter sent to all registered troop and service unit volunteers on the first day of every month. 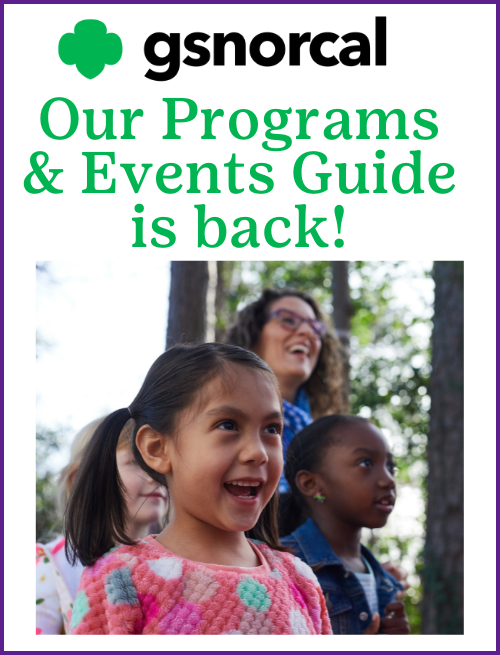